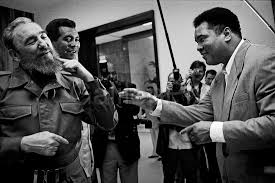 In 1996, Jude and me Michel happen to cross paths with a humanitarian mission led by Muhammad Ali and a team of Latino optometrists delivering 20 000 vision glasses and consultations in a Havana hospital.
Jude and Michel happened to be waiting for someone in the lobby of the famous Havana Libre Hotel next to Mohamed Ali sister in law Marilyn and family member Lonnie (or Leonie?), and his male chauffeur. Jude and I were one on our early seed mission/Solidarity Seed Tours, with the Cuban Department of Urban Agriculture and Cuba’s oldest  ecological foundation who hosted us. Muhammad was standing tall, nervous, looking at his feet and fiddling with his hands, just next to us but avoiding eye contact we talked to his minders. We heard from his proud sister about their humanitarian mission and we told them our reason to be in Cuba: Local seeds production for urban gardeners. Muhammad was relayed the information about Seed Savers, the issues he apparently knew about and our action across indigenous populations including Islam.
Muhammad Ali gave us a node of approval, we were invited to visit a Havana hospital with the optometrists team who were testing Cubans waiting in long lines as they do so often, to give appropriate vision glasses. We saw one person cry on testing glasses and reading for the first time in decades, to be able to see and read again.
I am very happy to see Fidel again,” Muhammad said in comments barely audible because of the effects of Parkinson’s Disease had on him. Ali was on his second visit in two years to Cuba, where he delivered to a Havana hospital a donation of more than $1.2 million of medical aid from a U.S. humanitarian organisation, the Disarm Education Fund.
The U.S. boxing hero, began his career as Cassius Clay but later changed his name, also visited Cuba in 1996 and New Year 1998 to hand over another donation of medical aid worth $500,000. This is when we met him.
The education fund’s executive director, Bob Schwartz, commented that the medical aid was a way of opposing the U.S. economic embargo on Cuba and easing its economic crisis.
“Why should they ask me to put on a uniform and go 10,000 miles from home and drop bombs and bullets on Brown people in Vietnam while so-called Negro people in Louisville are treated like dogs and denied simple human rights? No I’m not going 10,000 miles from home to help murder and burn another poor nation simply to continue the domination of white slave masters of the darker people the world over. This is the day when such evils must come to an end. I have been warned that to take such a stand would cost me millions of dollars. But I have said it once and I will say it again. The real enemy of my people is here. I will not disgrace my religion, my people or myself by becoming a tool to enslave those who are fighting for their own justice, freedom and equality. If I thought the war was going to bring freedom and equality to 22 million of my people they wouldn’t have to draft me, I’d join tomorrow. I have nothing to lose by standing up for my beliefs. So I’ll go to jail, so what? We’ve been in jail for 400 years.
Jet magazine Vol. 58, (August 1992)