The peasant food web is the best way of describing how most of the world’s food is grown. 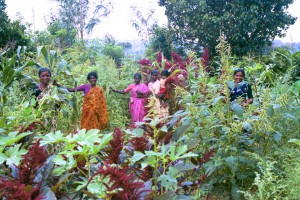 Tribal women in Karnataka are the guardians of seeds like these amaranth and okra.

It is better construed of as a web rather than a chain because of the interdependence and proximity of the wild and the cultivated, the animals and the plants, the producer and the consumer. Peasants allow plenty of land for wilderness and see themselves as its guardians. It has been said that a healthy agriculture needs at least ten times more wild area than cultivated. Peasants conserve traditional varieties of crops and breeds of domesticated animals. Peasants are usually consummate hunters, fishers and gatherers of wild culinary and medicinal plants.
Small land holders and urban gardeners produce nutrient-dense food that is eaten fresh, includes wild harvested plants and animals and is auto-consumed or eaten in the same eco-region or country, meaning low food miles. They are often poorly literate people unnoticed by government statisticians who recognise food only when it is sold on large markets. However the Food and Agriculture Organisation of the UN estimates that 85% of the world’s food is grown in this manner.

This is in sharp contrast to the industrial food chain 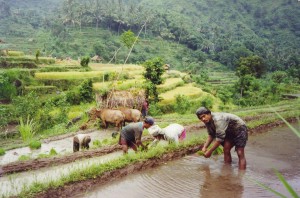 Rice fields of Bali, Indonesia preserve biodiversity around in the forests and on the bunds where farmer harvest fodder for animals. Small animals and fish are caught in the paddies.

Peasants traditionally exchange seeds, usually in an informal fashion, operating below the radar. Their varieties  necessitate no pesticides because local seeds are naturally hardy. After all they are the progeny of plants that have gone through generations of constant change in the local environment and bio-cultural practices.
Meeting farmers and gardeners in more than forty countries, Jude and Michel Fanton, the founders of Seed Savers Foundation have come to the conclusion that home-saved seeds are at the core, and a living legacy, of the peasant food web.
However the number of peasant farmers is diminishing and the reliance on corporate seeds increasing. The seeds and pesticide merchants are trying all they can to capture a bigger share of the market .Sadly many aid and development projects promote this model. They do not necessarily know about or support farmers saving their own seeds.
ETCgroup.org has the following to say about people feeding the Majority World also know as Third World.

Thanks to the ingenuity of farmers, the world’s major food crops have been encouraged to grow at a remarkable range of altitudes and latitudes in a variety of ecosystems. From early in the 20th century and especially since the 1960s, public and private commercial breeding has narrowed the genetic base of the world’s top food crops and massively eroded their genetic diversity. Beginning in the 1960s, the Green Revolution’s emphasis on wheat, rice and maize and the focus of commercial breeders on soybeans, alfalfa, cotton and canola (oilseed rape) pushed so-called “poor people’s crops” to the margins causing genetic erosion even in low-priority species. By the early 1990s it was roughly estimated that genetic diversity in the world’s leading crops was declining by about 2% per annum and that perhaps three-quarters of the germplasm pool for these crops was already extinct. This loss of diversity severely limits the re

More than the hunger crisis, the climate crisis points to the need to conserve and utilize genetic diversity in both the major food crops and in other crops that show a great potential to be productive while withstanding new pests, diseases and conditions. Who is best able to do this?
Peasants are also the ones who feed the hungry. Rural peasant production is closest to the 712 million rural people who make up three-quarters of the world’s hungry. These people are not only rural but also remote and impoverished or, in other words, of little interest to the industrial chain that prefers middle-class urban markets. Meanwhile, urban peasants grow at least a quarter of the food in the South’s cities – the food that is most accessible to the 238 million hungry people who can’t afford high food prices. By these estimates, at least 70% of the world’s population is fed by peasants.11
Policymakers must re-examine the common fallacy that, even when properly-supported, the world’s peasant food network lacks the bounty, efficiency and resilience to confront the food and climate crises. At the same time, policymakers must deconstruct the mythology surrounding the effectiveness of the industrial food system. The reality is that the world’s 3 billion or so indigenous and peasant producers rural and urban, fishers and pastoralists not only feed a majority of the world’s people and most of the world’s malnourished, they create and conserve most of the world’s biodiversity and are humanity’s best defense against climate change.

The industrial food chain prizes uniformity and stability. But these attributes fight against climate readiness and food security. Today, our crops and livestock desperately need genetic diversity, not uniformity. While we don’t want “unstable” varieties and breeds, we do want “plasticity” – the genetic capacity of plants and animals to respond rapidly to changing conditions. Replanted seed adapts over generations to local agronomic conditions and offers higher and more reliable yields. Both patents and related regulations are forcing farmers to buy new – and, therefore, unadapted seed – every season, denying agriculture one of its most important tools. Any restrictions on the right to conduct research using patented breeding material must be struck down since it blocks peasants from their customary breeding activities.

But who are these peasants?

Farmers: Of the 450 million farms, 382 million (85%) have 2 hectares or less and statisticians customarily refer to them as smallholders or peasants.91  Very significantly, 370 million93 are indigenous peasants on at least 92 million farms. In total, peasants probably have significantly more than half of the world’s cropland. Of the global 1.56 billion hectares in arable and permanent crops (many countries classify “peasants” as holding 5 hectares or less), 764 million hectares could be held by peasants and not less than 225 million are held by big farmers. Mid-size farmers would then hold 571 million hectares (or an aver- age of 36.8 ha).94   In some definitions, some researchers tend to incorporate peasant “farms” that have much less than one-tenth of a hectare per person. The inclusion of these almost- landless peasants into productivity calculations grossly distorts the productivity of most peasant farms.

92:  In 1996, FAO’s State of the World Report on Plant Genetic Resources estimated that 1.4 billion people depend on farm-saved seeds. This was an estimate based on FAO’s assumption of the number of people living on peasant farms. (Personal communications, Cary Fowler and David Cooper, March 2009.) See also, Oxfam Briefing Paper 129, “Investing in Poor Farmers Pays,” (2009). Oxfam estimates that 1.7 billion poor people live on farms in low and middle-income countries accounting for about two thirds of all farmers in these countries. Of these, Oxfam says that 906 million farmers live in areas of substantial production potential.

91 and 94: Extrapolated from von Braun. See also, Uwe Hoering, Who Feeds the World? May 2008, Church Development Service.
An Association of the Protestant Churches in Germany (EED) – Evangelischer Entwicklungsdienst, pp. 8-9: “… small farms account for an estimated 80% of the land used for agriculture. With small fields, worked under difficult conditions and with scarce means, these farms contribute nearly half the food that feeds the world…