The industrial food chain is specialised, mono-cultural and linear in contrast to the complexity, diversity and interdependence of the peasant food web. 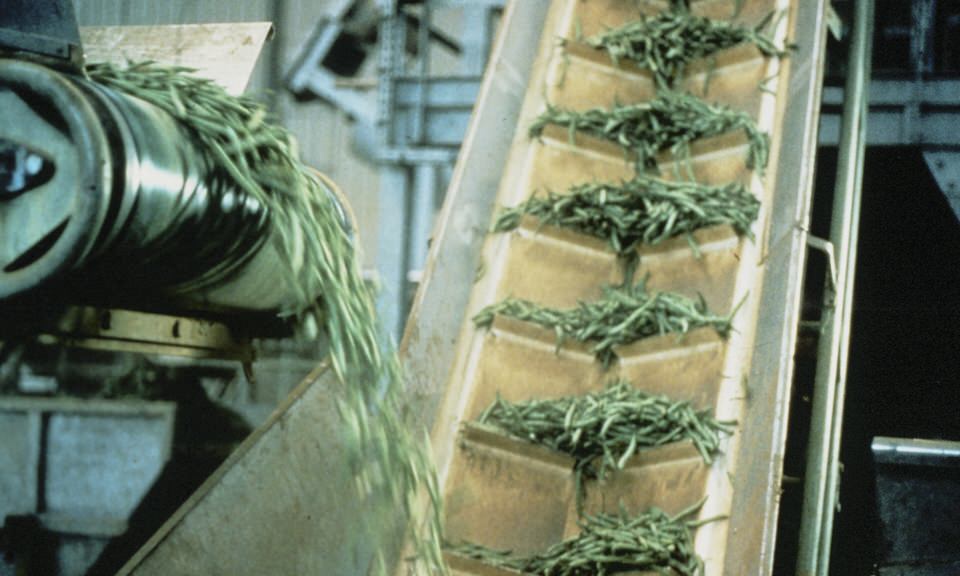 While the food chain is linear, it is long, with many processes and much transport between the seed and the plate. Industrial farmers don’t know the source country of the seed they buy, the supermarket attendant may never have seen a farmer, the consumer is not told anything about plant origins, processing and preservatives.
In some countries like USA Genetically Modified Organisms (GMOs) are not even labelled.
The poor of the rich world annually eat 50kg of chicken yet the majority have seen neither a live nor a dead fowl, just chicken nuggets.
Restricted Diversity: Peasants have domesticated at least 5,000 plant species but the industrial food chain uses only 3% of them*. Only about 150 plant species are grown commercially around the world. Globally crop production concentrates on twelve plant species of food plants (with maize, rice, wheat and potato dominating).

Each link in the food chain right up to your plate, is dominated by a handful of corporations working across borders.

Fungicides, seeds, and Roundup herbicide in an Indian seed and chemical shop in Mysore – that about sums up the industrial food chain.

The chain begins with the multi-million dollar research lab, the breeding of seeds in glass houses to produce hybrid and GMO varieties dependent on agrochemical pesticides, (Monsanto along with Dupont dominates seed and pesticides).
Patenting offices, such as UPOV in Switzerland, protect the investment.
The processing of food drastically reduces its nutritive content and compensates by adding artificial flavors, vitamins and minerals derived from the oil industry.
Fewer manufacturers constantly create more new / same products promoted by advertising campaigns.
Lastly the well-oiled distribution chain (dominated by Walmart in the US and Woolworths and Coles in Australia) rents its shelf space to the highest bidder.
The populace becomes fat and sick on this denatured, nutrient-sparse food. Meanwhile there is environmental destruction and social upheaval on a massive scale with land grabs and rural exodus to urban nightmares and this really bad food.

Back to the seed
Let’s look at who owns what seed.

Each link in the food chain right up to your plate, is dominated by a handful of corporations working across borders.

There is an alternative to the industrial food chain