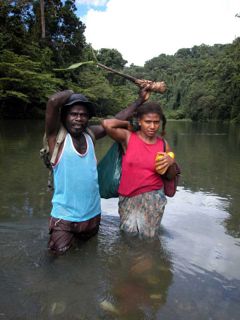 Collecting banana varieties and species rare and endangered was Dorothy’s passion. She lived with husband a bush carpenter and their children in the island of Makira in a highland small  and isolated village named Bagohane, five hour walk from coast as there is no possibility of road in excessively steep highlands. At 19 she organised several collections of banana in her old Vocational Training School in Manivivo an isolated costal hamlet. Her own birth village has one collection and another village higher in the hills was the site of yet another collection. When Michel visited, Dorothy had collected 115 varieties by canoe and by walking everywhere. She was a fun loving carefree village girl with a vision inspired by the taro collection that SeedSavers funded with the help of the Flow Fund. She died at 35 we don’t know yet how. Communications are very difficult. I read the the island mobile tower was not functioning. The photo was taken while Dorothy and Otto from Bougainville crossed a river in Makira Island as all the people from villages in the highlands do when they go to market on the coast.